The monthly report from the Office of Personnel Management (OPM) detailing the number of new retirement claims received and processed, along with the monthly average processing time was released for August. In it, OPM reported the highest number of claims processed since March of this year and a 4.5% decrease in the number of outstanding claims for the month. 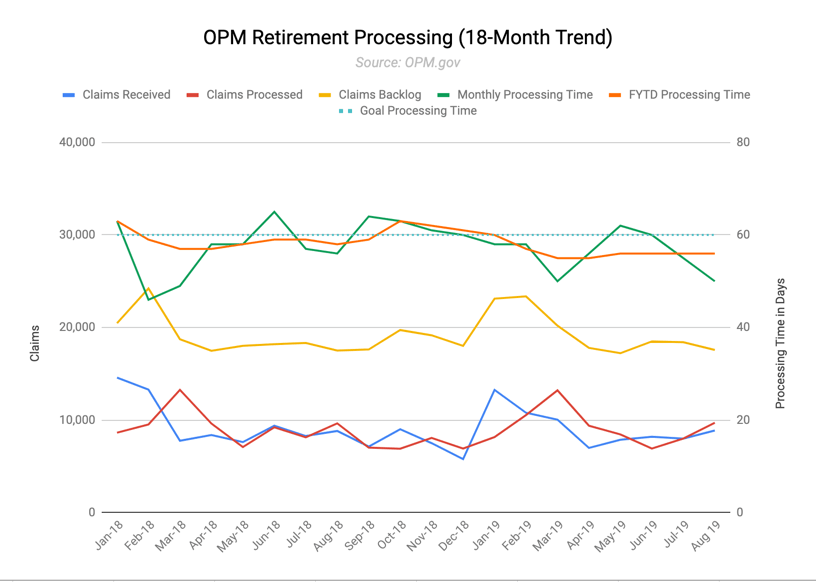 There are currently 17,576 applications in the backlog after OPM received 8,878 new applications and processed 9,715 for the month of August. This marks a substantial increase from the average number of applications processed in the previous three months and the highest number since the 13,217 that were processed in March of this year. The average time to process also dropped to only 50 days, the lowest reported number of 2019. The FYTD average processing time in days remains consistent with the 56 days reported in May, June, and July.

The increase in processing in August brings the backlog back in line with the lower numbers reported in April and May, when it was also below 18,000. The lowest backlog total in the last two years remains December 2017 when it dipped to 14,515. The high-water mark in that time period was 24,225 in February of 2018, after the annual surge that occurs around the beginning of the year. That number is still well below the all-time highs seen in 2012.

Learn more about some of the recent recommendations that the US Government Accountability Office (GAO) prepared in a recent audit of OPM’s retirement processing times and efforts for improvement in a recent blog post summarizing the report. You can also read about the benefits of IT modernization to improve processing times for federal agencies.