The Office of Personnel Management (OPM) released its monthly report outlining progress against the backlog of new retirement applications and their processing time for July. After two consecutive months of increases, the number of applications in the backlog remained largely unchanged with a 0.48% decrease from June. 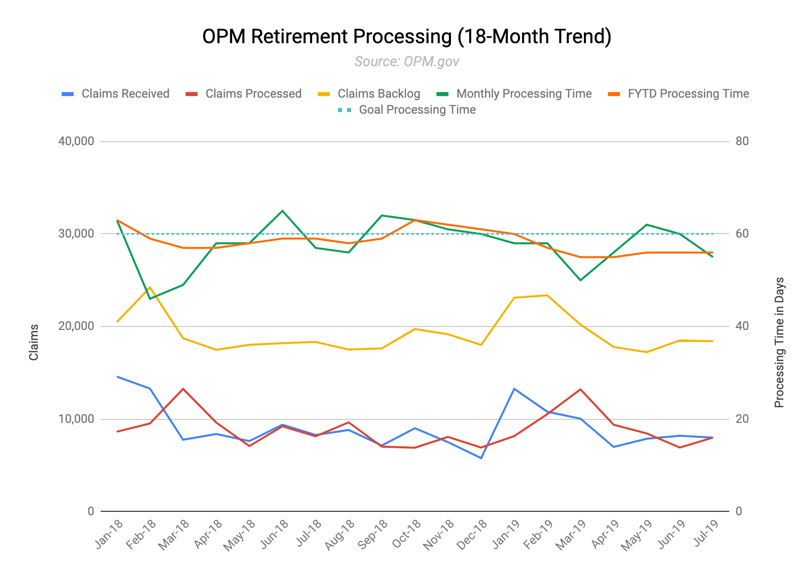 There are currently 18,413 applications in the backlog after OPM received 8,000 new applications and processed 8,088 for the month. The number of applications processed in July increased from June, when only 6,928 were processed (the lowest number in 2019 thus far). The average time to process also dropped to 55 days, below the 60-day target set for OPM. The FYTD average processing time in days remained steady from the last two months at 56 days.

While the backlog remains at the same level as it was in June, it is still well below this year’s high-water mark of 23,370 in February. Overall, OPM’s backlog numbers have been on a steady slope of improvement since their all-time highs of over 60,000 in 2012.

Despite those improvements, there is still work to be done according to a recent GAO report. The report investigated the causes and potential solutions for OPM’s retirement application backlogs and found that there were three major issues that needed to be addressed, including IT modernization, staffing adjustments during peak months, and the number of errors in applications from agencies.

Several items have been identified to address these issues. We review these in greater depth in a pair of recent blog posts discussing the processes and benefits of IT modernization and paperless retirement applications.